41 is the age Brits get into gardening, says poll 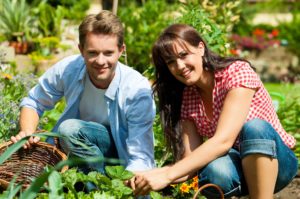 Forty-one is the age when we officially embrace gardening as a hobby, a new survey has revealed.

Researchers took an in depth look into the precise time in our lives that we turn our attention to our outdoor spaces – and found that it’s not until we reach 41 that we become green fingered.

Up to this age, nearly three in 10 adults rely on elderly parents to sort out their borders – with one in 20 even calling on grandparents to tend to their needs. A further one in 10 resort to watching clips on YouTube to help remedy their horticultural issues.

The poll of 1,500 adults by garden tool supplier Fiskars reported that a third has never trimmed a hedge and nearly a quarter have never potted a plant. A further 23% claim to have never mown a lawn or raked leaves.

Half of the respondents said they wouldn’t be able to identify a fuchsia, 40% would struggle to spot a pansy and more than half wouldn’t recognise a geranium.

Getting stung by stinging nettles, pulling up a flower by mistaking it for a weed and trapping fingers in deckchairs are just some of the calamities Brits have faced when trying to tackle the garden.

Cutting the grass with no blade in the mower, putting hands in cat mess and treading on an upturned rake were other common faux pas.

Kid’s toys strewn everywhere, grass growing too quickly and not having the right tools for the job are among the factors that annoy Brits about their gardens.

A spokesman for Fiskars said: “Getting into gardening at the age of 41 may seem late, but with many adults not getting on the property ladder or living in flats until their late thirties, it’s becoming the norm. Gardening can seem daunting at first and it’s only natural to want to call upon parents or grandparents who tend to be much more knowledgeable.”

Botanist and broadcaster James Wong commented: “Despite these findings, there is still some hope. Nowadays there are plenty of cutting-edge gardening tools at hand which are ideal for all types of gardeners – amateur to novice – making light work of transforming outdoor spaces.

“Gardening is a great hobby for people of all ages and is particularly beneficial. It’s a fun, healthy activity – plus the sense of satisfaction you feel when you watch something you’ve had a hand in growing is immeasurable.”

In fact a quarter of Brits surveyed see themselves as a keen gardener. More than a third described their garden as a place to ‘escape from it all’ and one in 10 said they were immensely proud of the way their outdoor space looked.