10th February 2018 News Comments Off on 20 big names sign up for The Great Celebrity Bake Off for Stand Up To Cancer 2,182 Views 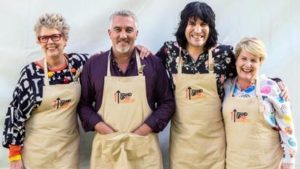 ‘The Great British Bake Off’ tent is welcoming 20 celebrity bakers for five episodes of ‘The Great Celebrity Bake Off for Stand Up To Cancer’ which will air on for Channel 4 later this year.

In each episode, four big names will battle it out over three rounds in a bid to be crowned Star Baker.

Bake Off judges Prue Leith and Paul Hollywood will be judging the celebrities’ efforts, and Bake Off hosts Noel Fielding and Sandi Toksvig will be providing tea and sympathy for the contestants in the pressure-filled tent.

Stand Up To Cancer is a joint national fundraising campaign from Cancer Research UK and Channel 4, which returns this year with a variety of fundraising activities and a series of special programming on Channel 4.

The broadcaster said the initiative ‘will culminate in a fantastic night of TV on Channel 4 this autumn’.