22nd November 2018 News Comments Off on £150 million forecast to be spent in London’s West End during Black Friday weekend 1,091 Views 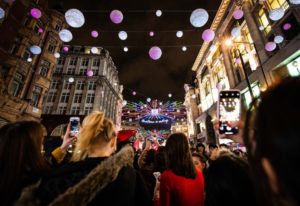 The partnership said: ‘Black Friday is widely recognised by the retail industry as one of the biggest trading weekends of the year and the day that kicks-starts the Christmas shopping season. This is due its timing, which means traditionally it lands after the last payday before Christmas.

‘However this year, Black Friday falls before this important payday and this, combined with tightening consumer purse strings means that retailers will be pulling out all the stops to ensure they are creating an appealing offer to attract early Christmas spend.

‘Throughout Black Friday weekend, many of the West End’s leading brands will be focusing heavily on experiential moments, sharing knowledge and exclusive in-store only promotions to draw savvy shoppers into the area to spend or browse.

‘While Black Friday deals can be found both in-store and online, Londoners, Brits and international tourists alike will still prioritise a visit to the West End during the Black Friday weekend as a result of the one-of-a-kind experiences and professional product expertise that’s only available in-store.’

Kyle Monk, head of insight at New West End Company, commented: “Despite a tough year for retailers, we predict that Black Friday spending in the West End will be on par with last year and a significant £150 million will be spent as visitors take advantage of special offers to help in their gift buying.”

Oxford Street officially launched the Christmas shopping season in London’s West End, where sales are expected to reach £2.51 billion this year. Traffic was halted at Oxford Circus for the first time ever to illuminate the street’s Christmas lights with a brand new format of in-store gigs and experience-led shopping